Dr Mike Martin speaks and writes on conflict, particularly its causes. He regularly appears in international media, lectures and publishes on the subject. 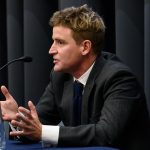 Dr Mike Martin is a War Studies Visiting Fellow at King’s College London, where he speaks and writes on conflict. Mike often comments in the international media about conflict, geopolitics, and military strategy.

Mike is the author of four books. His most recent book, Why We Fight, which explores the evolutionary psychology of warfare, is available now. Read More >

Why We Fight (Estonian translation)

‘A pivotal book in the study of conflict … brilliantly deploys psychology and neuroscience to devastating effect. It has radical implications for policies for conflict reduction.’ Professor Sir Paul Collier

‘Why We Fight is an ingenious exposition of a long-standing philosophical problem and an evolutionary psychological explanation of war. It is an intriguing and unusual book.’ Parameters

‘Required reading for not just biologists, psychologists and historians, but military leaders and recruiters as well.’ British Army Review

‘A remarkable story of psychological and physical endurance, and a compelling account of what pushes people to embark on impossible journeys.’ Sir Ranulph Fiennes OBE, FRGS

‘A deeply, brutally honest view of what it is like to complete a great journey. At times they were lucky to survive.’ Robin Hanbury-Tenison, FRGS

Shortlisted for the Edward Stanford Adventure Travel Book of the Year

‘This is the best book ever written on Afghanistan. Martin writes what I have been feeling since the ’80s, but have not expressed in such a clear way … a remarkable work of political anthropology.‘ Professor Olivier Roy

‘An extraordinary book … An Intimate War is the work of a wise and patient scholar.’ London Review of Books

‘An uncompromising, deeply thought and important contribution.’ The Times

Foreword to Taliban: A Critical History from Within

Chapter in Tribes and Global Jihadism

A brief history of Helmand

Mike regularly speaks and writes on a wide range of issues relating to conflict. He delivers speeches to organisations, societies and institutions worldwide, as well as to governments and militaries, including those of the US, the UK and Australia. Mike also accepts commissions from publications and think tanks for written analysis on defence, conflict and foreign affairs.

With respect to training, Mike designs and delivers language immersion programmes, cultural intelligence/advisory courses, and conflict analysis courses to a wide range of audiences. These can be delivered face-to-face, online, or via blended learning. He also acts as a legal expert, particularly relating to immigration and liability cases in Afghanistan.

Mike often comments in international media including the BBC, TIME, NPR, DR, CBC, WSJ, Economist, Irish Times, The Guardian, The Telegraph, Vice, Information, Prospect, etc. He also works with film and documentary makers, for example, advising the cast and crew of the film War Machine featuring Brad Pitt, or appearing in Bitter Lake by Adam Curtis. Should you wish to contact Mike, please see below.

To contact Mike or enquire his availability, please either: