Dr Mike Martin is a War Studies Senior Visiting Fellow at King’s College London, where he speaks and writes on conflict. He also works with governments, militaries and other organisations around the world, helping them to understand and navigate conflicts. Mike often comments in the international media about conflict, geopolitics, and military strategy. 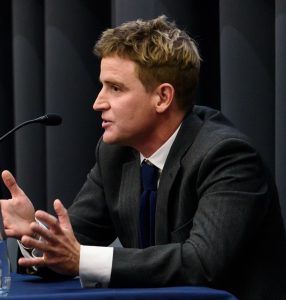 Mike began his career as a (Pushtu-speaking) British Army officer where he pioneered, designed and implemented the British Military’s Cultural Advisor programme (profiled here in The Sunday Times). This programme took Pushtu-speaking British officers and trained them to build relationships with Afghan notables in order to understand and influence the society in which the UK military was operating. During this period, he also worked as an advisor to four commanders of the UK’s Task Force Helmand, advising them on local population dynamics.

He subsequently read for his PhD at King’s College London on the history of the conflict in Helmand province, Afghanistan, which later became a critically-acclaimed book, An Intimate War.

Mike then worked in Somaliland and Myanmar for a risk management company as Research Director. There, he set up a new division for the company that focussed on helping multinational clients understand and navigate the social, political and cultural environments in frontier and conflict-affected markets. He later held two senior global management positions in the cross-cultural leadership NGO Common Purpose, and spent time working at the UK Government’s Stabilisation Unit.

These broad experiences of conflict encouraged Mike to write another book, called Why We Fight, which explores the evolutionary psychology of warfare. His latest book is called How to Fight a War which will be released in March 2023.

A life-long expeditioner, Mike previously crossed the Congo River basin by LandRover (later turned into the book Crossing the Congo), and has sailed 25,000 nautical miles across the Atlantic and Pacific Oceans in small boats.